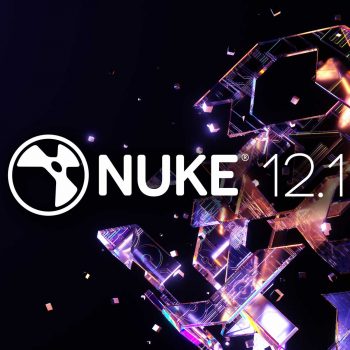 New Shuffle Node
Introducing a new, updated version of the Shuffle node which will replace both the Shuffl e and Shuffl eCopy nodes. With a more user-friendly UI, the updated node improves stability and offers consistent channel ordering relative to the previous Shuffle node. Plus, it can now support one or two inputs and up to eight channels per layer.

Updated SphericalTransform and Bilateral nodes
We’ve merged the NukeX and Cara VR versions of SphericalTransform and Bilateral with the Nuke versions of these nodes, adding increased functionality and GPU support in Nuke. Spherical Transform has a new MirrorBall projection method, alongside access to the standard set of Nuke filter methods. Both nodes take advantage of the CaraVR GPU Caching improvements added in nuke 12.1 and are available in Nuke—they do not require a NukeX license.

Cara VR GPU Caching
Improvements to Nuke’s GPU processing architecture result in significant performance improvements for chains of GPU nodes that use this new behavior. In Nuke 12.1, all of the Cara VR nodes, including SphericalTransform and Bilateral, as well as Blinkscript nodes take advantage of keeping data on the GPU, resulting in signifi cant improvements in viewer processing and rendering.

New BlinkScript Particle Support
NukeX now includes a new ParticleBlinkScript node. This node allows users to write BlinkScripts which operate on particles and further enables users to write their own custom Particle nodes. We’re also providing 14 new gizmos as a starting point for artists and developers using ParticleBlinkScript to create new particle tools. To facilitate these updates, we’ve made some updates and fixes to Nuke’s BlinkScript framework to improve performance for GPU-accelerated nodes and help developers working with BlinkScript, including a new debug printout. See the release notes and developer documentation for details.

Grid Warp Tracker Improvement
The NukeX Grid Warp Tracker introduced in Nuke 12.0 has several improvements to help you control and move your data where you need to in a script. We’ve introduced new export options, allowing users to export tracking data from the GripWarpTracker node to a Tracker (baked), a Tracker (linked) or a Transform node. Plus, users can export tracking data from the entire grid, a selection of grid points or just a single grid point to help pinpoint the exact tracking data needed.

Lens Distortion Workfl ow Improvements
We’ve revamped the NukeX LensDistortion node to offer a more intuitive experience and provide all the features you need right at your fi ngertips. The main tab has been refined to make it your fi rst stop for setting up the distortion models. It’s also been updated with new features and user experience improvements, like setting the default output mode to undistort rather than STMap. The second tab has now been updated to ‘Analysis’, offering all controls for both the grid detection and line drawing workfl ows you’re used to. Plus, the advanced tab now offers even greater control for fine-tuning your distortion model or work with fisheye data.